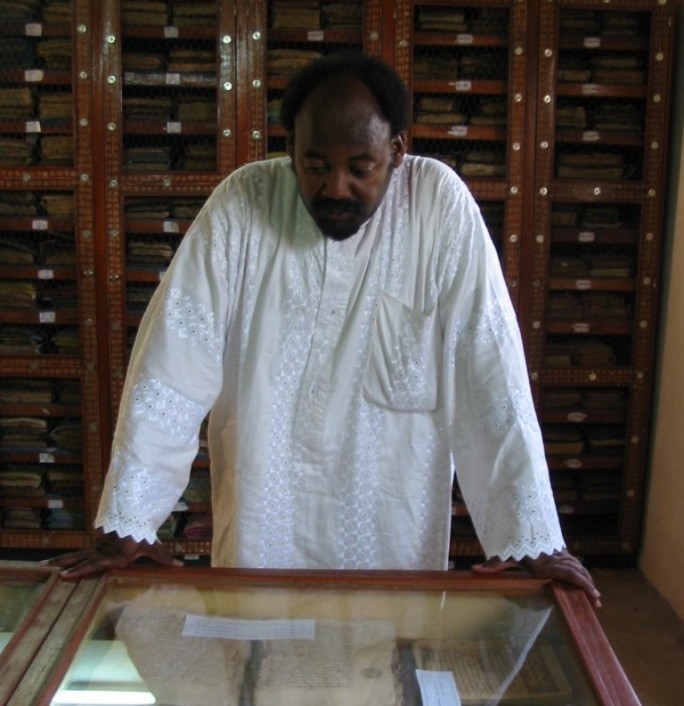 Time has not been kind to this once-great centre of civilization, which in the early 1500s inspired the Spanish explorer Leo Africanus to paint a picture of a learned, cultured and peaceful place where books were the main industry, where one literally walked on “gold.” Lured by this promise of riches, European explorers tried for centuries to find Timbuktu. By the time the first ones finally arrived in the 1800s, they found a desolate desert outpost not all that different from the sand-swept town of today, with no evidence of all the fabled wealth. Hence, the Western myth about a never-never place with little to offer the world — a myth that is about to be exploded.

Today, treasures are being unearthed here that are radically changing the way the world views Timbuktu, Africa and her history. They’re called the “Timbuktu manuscripts” and they disprove the myth that Africa had no written history. While many thousands have been recovered, there are still hundreds of thousands of manuscripts hidden away in wells and mud-walled storerooms in northern Mali. Huge collections have been passed down in families over many centuries, kept out of sight for fear that European explorers, and then French colonists, would abscond with them.

“Before, all the manuscripts were kept in our homes,” says Abdelkader Haidara, who has inherited his family’s collection of 9,000 written works dating back to the 16th century. “Then, in 1993, I had an idea to open a private and modern library that would be open to everyone.” Thanks to funding from an American foundation, Haidara has been able to open his Mamma Haidara library and catalogue 3,000 of the manuscripts, some of which date back to the 1100s. None of this would have been possible had not Henry Louis Gates Jr., chair of Harvard University’s African and African-American studies department, visited Haidara and realized the importance of preserving these documents.

“When Professor Gates came here and saw the storeroom full of these manuscripts written by African scholars centuries ago, he started to cry,” says Haidara. “He wept like a child, and when I asked him why, he said he had been taught at school that Africa had only oral culture and that he had been teaching the same thing at Harvard for years and now he knew all that was wrong.”

Gates recalls how he felt the day Haidara showed him the manuscripts that “put the lie” to Western claims about Africa’s lack of written history and intellectual tradition. “When I held those books in my hands, tears rolled down my face,” he says. “It is unquestionably true that I was moved to tears by the feel of these books, of this history, in my hands. It was one of the greatest moments of my life.”

“You know, many people consider Timbuktu to be the end of the world,” says Mahamoudou Baba Hasseye, the owner of another private library. “But it was an important centre of Islamic scholarship and culture, and people from all over the world came here to study at the Sankore University in the 15th and 16th centuries. There were 100,000 people in the city and one-quarter of them were students or professors.”

Hasseye is the direct descendant of one of the city’s great scholars, Mohamed Bagayogo, whose father came to Timbuktu from Yemen in the 1400s. Mohamed Bagayogo went on to become one of the city’s greatest professors and his writings on law, governance and justice still adorn the frayed margins of hundreds of ancient manuscripts. Mahamoudou Hasseye is also the former director of the Ahmed Baba Institute, a public archive in Timbuktu that is named after one of Bagayogo’s students.

“Ahmed Baba wrote more than 50 books,” says its deputy director, Sidi Mohamed Ould Youbba. “He was a contemporary of William Shakespeare and he wrote more than Shakespeare, and the only reason he was not as well known is that Timbuktu was isolated; Europeans couldn’t find it.”

The Ahmed Baba Institute has a collection of 30,000 manuscripts, all fantastically scripted and some adorned with gold. They deal not just with Islamic law and theology but also astronomy, mathematics, geography, herbal medicine, conflict prevention, democracy and good governance, all written centuries ago. Books known as the “Searchers’ Chronicles” are comprehensive historical accounts of empires in West and North Africa up to the 16th century.

One of the authors of the Searchers’ Chronicles was a scholar named Mahmud Kati, whose father immigrated to Timbuktu from Spain in the 1400s and whose mother was Songhay royalty, sister of the Askia Mohamed who ruled the flourishing Songhay Empire that controlled Timbuktu at the time.

Ismael Haidara, one of Mahmud Kati’s direct descendants, has received Spanish funding to develop the Fondo Kati Library in Timbuktu, in which thousands of his forefathers’ invaluable manuscripts are stored. “The problem is that the manuscripts need to be preserved, and that is very expensive,” says Hawa Haidara, who co-manages the family library with her husband. “You can’t handle them or words fall literally right off the pages, because the paper is old and so fragile,” she says, pointing to a pile of bits of paper on the floor. “The other problem is that all these manuscripts are written in Arabic scripts, even if the authors were sometimes writing in African languages, so even if we get funds to restore them, the manuscripts must also be digitized, translated and studied to see what all is in them.”

In calculating Timbuktu’s wealth, Ismael Haidara notes that his ancestors include black Muslims, white European Christians who converted to Islam and also black Jewish merchants who settled in Timbuktu centuries ago. “Timbuktu may be one of the poorest places on Earth,” he says. “But it is important not to forget that every citizen of Timbuktu has in his eyes and in his blood a thousand years of history and a thousand years of different cultures. And that is our wealth.”

The multinational European, American and African research teams now working to preserve, restore and study the precious written treasures of Timbuktu say theirs is an urgent mission, since poverty is leading to the sale of some fine items, while climate and insects continue to take their toll on the fragile paper. This year, South African President Thabo Mbeki launched Operation Timbuktu to build a new Ahmed Baba Institute facility and an exhibit of some of the most valuable works was mounted in South Africa in October. Meanwhile, several institute staff members have been to London for training courses on preservation and restoration of manuscripts. To date, only 2,500 of the institute’s 30,000 manuscripts have been analyzed and deputy director Youbba says that without more assistance — new computers and more trained staff — the digitization will probably grind to a halt.

Despite continuing projects funded by Norway, the United States and South Africa to help restore the manuscripts, the task ahead is daunting for an impoverished country like Mali, where hunger and poverty take precedence over ancient documents. Indeed, on a recent trip to Spain to drum up funding for his library, and exhibit manuscripts there, Ismael Haidara also arranged for a shipload of food to be sent to Timbuktu to help ease the famine brought on by last year’s drought and locust invasion. Hawa Haidara says efforts to have scholars “adopt a manuscript” to aid in preservation efforts didn’t provide even enough money to cover the cost of electricity in the family library. To do that, they now sell small brochures for about $1 each to visitors.

“So far, it is as if a baby has just been born,” says Abdelkader Haidara of the efforts to reclaim the knowledge in these written treasures. “Now, the baby needs to grow and be protected to reach adulthood. “These manuscripts have interesting texts on women, about family life, about traditional medicines that could be valuable to the world. But now we need to restore and digitize them, so they can be translated and studied around the world.”

If all that is accomplished, Malian historian Salem Ould Alhadj says, the world will see that “Timbuktu is not the end of the Earth; it’s the centre.” And with a smile, he recites a Timbuktu proverb: “Salt comes from the north; gold from the south; money from the country of the white man. But the beautiful word of God, knowledge and wonderful stories come only from Timbuktu.